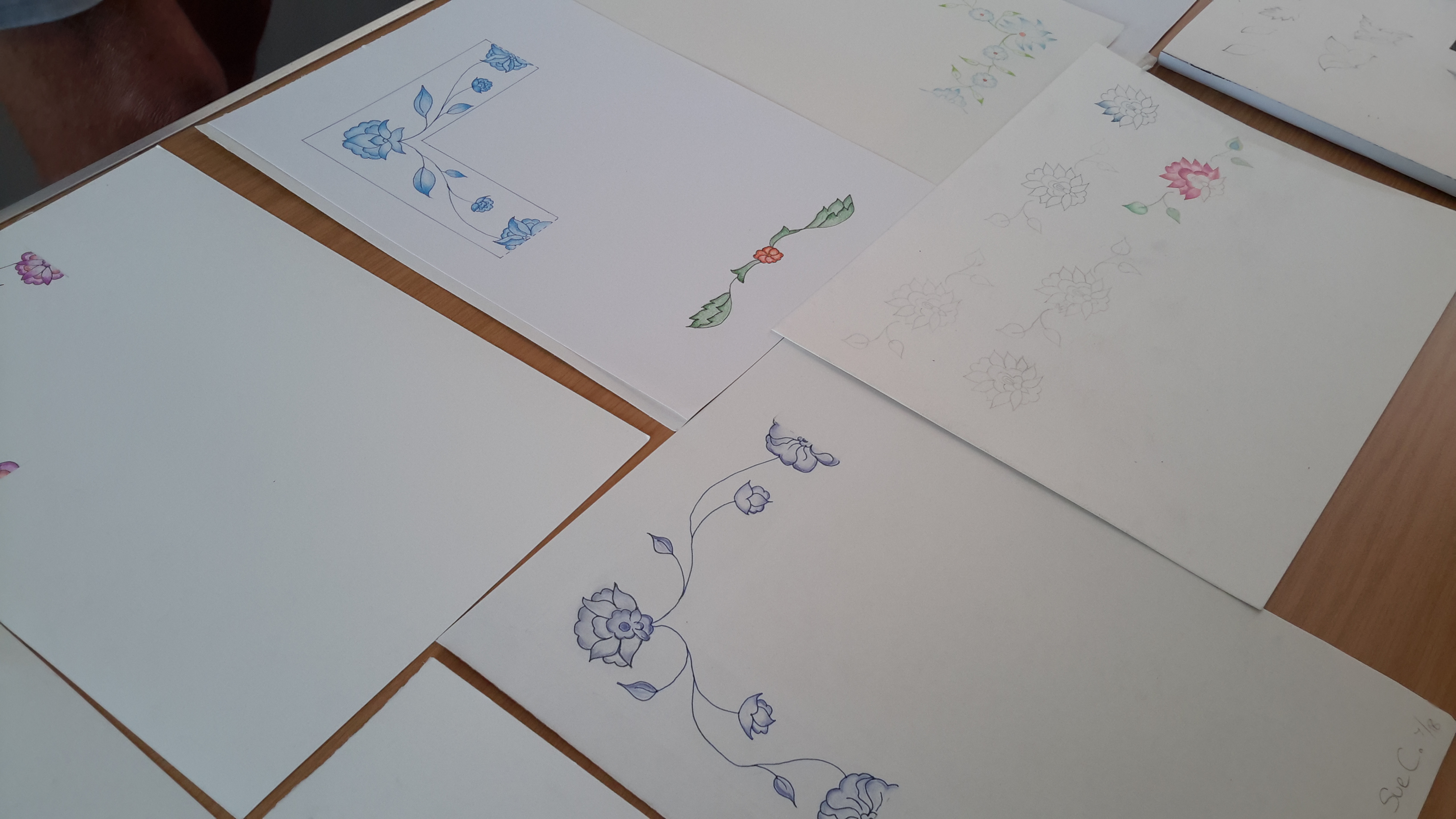 On a very sunny day South Wales Scribes enjoyed a workshop superbly led by Sylvie Gokulsing who explained that arabesque had nothing to do with ballet and everything to do with designs derived from images found in nature used to create rhythmic, scrolling and interlacing patterns.

For hundreds of years these stylised images have been found not only in illuminated manuscripts and on ceramics, but in buildings, carpets and textiles.

Arabesques made from leaves and flowers are called Hataŷî, so we also learned a little bit of Turkish. These were widely used in Ottoman decoration from the 14th century but they exist in wall paintings from 600 years earlier and probably originated in Chinese Turkistan long before Byzantine artists developed their stylised versions of acanthus. So it was no surprise to find that Hataŷî means ‘from Cathays’ i.e.China’.

To whet our appetite for the exquisite decoration that could be achieved Sylvie had brought along an A3 handmade book of stunningly beautiful Islimi examples, which she had created.

We started the day with 4B pencils and practice paper and the focus was on four basic design elements:

· a flower with varying numbers of petals seen full face (the Penç);

· a half-opened flower seen from the side (the Goncagil);

· a flower seen from the side but with the centre visible (the Hataŷî motif).

Sylvie distributed several examples for each design element and people practised finding that magic combination of the one they most liked and the one they could draw well. She showed how combining these elements could create beautiful borders. Even better was discovering that drawing just one quarter of the design could generate the other three quarters. Indeed such tessalation could be used to fill a page.

Sylvie introduced us to two traditional colouring techniques both involving graduated tones – so monochrome was fine. In Halakar the heaviest colour came at the tip of the leaf/petal, whereas in Mun Hani the darkest areas were at the point of growth. in the latter technique there were usually three tones and the internal shapes were outlined.

The day ended with the class exhibiting an impressive variety of skilfully executed Islimi arabesques.

All in all a highly stimulating, challenging and enjoyable day. Our warm appreciation to Sylvie for so brilliantly capturing the essence of Islimi in a gently flowing, carefully structured and delightfully balanced workshop.