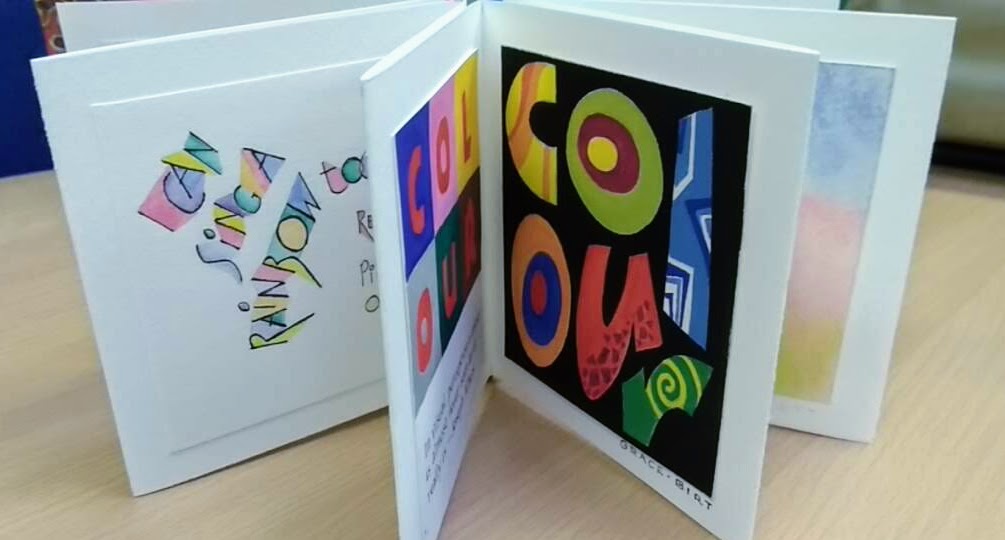 The idea for this collaborative project was originally discussed in the 2017 AGM. After a short discussion we settled on a book with the theme ‘colour’ and members were invited to contribute pages.

Our Treasurer Grace has made a concertina book with a gorgeous fabric cover to hold the pages and the above photo shows our combined efforts.

When looking at the contributions at this year’s AGM, we were fascinated by the different interpretations people had made of the theme.  Here are some of their thought processes and inspirations.

Our next annual meeting day is on Saturday 12 October 2019.  Do come along if you can. Those who attended last year really got a lot out of the activities we did and said how much they enjoyed it.

We’re already planning our ideas for this year.  And, honestly, the formal meeting part of the day is interesting – it’s your chance to talk about how the year is gone, what you’d like to see in the future, and to suggest ideas that will make South Wales Scribes an even better group for you, its members.

Most of us know that South Wales Scribes founder member and CLAS Tutor Judith Porch produces exquisite freedom scrolls for those honoured by the City and County of Swansea.

They are all personally tailored to the individuals concerned, acknowledging their contribution to Swansea, Wales and the  world more widely.

Here is Judith with Alun Wyn Jones (Wales Rugby captain – Grand Slam 2019, just in case you didn’t know!) at his presentation in June 2019.

If you are inspired you will have the opportunity to have a go yourself.

South Wales Scribes are excited to announce a new exhibition to mark our 10th anniversary.

The exhibition entitled The Written Word will open in February 2021 and comes almost exactly 5 years to the day after the opening of our first exhibition Transformation | Trawsnewid .

We are delighted to be exhibiting once again in the historic Swansea Museum.

In October of 2017 SWS Member Joan Mallett entered a WI competition to create a White Ribbon Logo for the ‘Not in my Name’ campaign.

The campaign was established in 2012 to raise awareness of Violence Against Women (VAW) and to challenge the attitudes and behaviours of a minority of men who use or condone violence against women. Annually, the Campaign marks White Ribbon Day and involves WI members in awareness-raising activities and in the recruitment of male ambassadors in speaking out against VAW.

Joan’s entry came second in the competition and she was invited to the Senedd in Cardiff to attend the event to mark White Ribbon Day and collect a certificate from Ken Skates AM, then Cabinet Secretary for Economy and Transport.

The design featured pastel to highlight the white ribbon logo and black and red gouache for the lettering.

The winning entry was a set of earrings and a pendant of the white ribbon logo made from polymer clay and silver, and third place was a machine embroidery of the logo.

“Divine Inspiration”, the 95th Anniversary Exhibition of the Society of Scribes and Illuminators took place in York Minster from 3 – 18 September 2016.

Judith Porch had an amazing piece in the exhibition entitled “Monolith” which she hoped would surprise and intrigue.  Here is what she said about it:

I began by considering what the words ‘Divine Inspiration’ meant to me. I quickly realised that creativity, its origin and how it manifests itself would be my starting point.

When we experience that ‘light-bulb’ moment what is it that sparks it? I came up with two opposing answers.

I began to consider how I would represent this concept and as is often the case with my work – light played a central role. I found myself drawn to the idea that if I had light coming from the top of the box, projecting the words ‘Divine Inspiration’ it would look ethereal; people could put their hands through it yet not touch it. My next challenge was how to create this effect? I found the answer with motion sensor lights.

If I asked you ‘Is Divine Inspiration within you or without you’ what would you say?”

This will be the formal meeting to look at finances, choose committee members, look back at the year and discuss future plans. Only paid-up members of South Wales Scribes will be able take part in discussions and decisions.

There’ll be three separate activities going on at the same time, lasting about an hour or so each. The idea is that we split into groups – each group start with a different activity and when you’ve finished you move on to the next activity. So everybody has a chance to do all three activities.

A neat and deceptively simple construction with no glue (except maybe for the cover) – and one where you can change your pages later on if you want to.

I’m not quite sure what to call these but it’s a different way of using embossing tools (or crochet hooks) to create some decorated letters which you can use for cards, etc.

Tips and methods for working out the space to leave around your calligraphy, including book margins and flat pieces of work (and who knows what else)!
4.00 pm Close